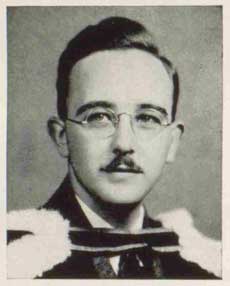 Member of the Dramatics Society, Assistant Stage Manager for the Little Theatre in 1935 (The Quad, 1935, p.49-50); Stage Manager for J.M. Barrie’s “The Admirable Crichton” in 1937, the play reportedly described by the principal as “the finest production he had seen by Bishop’s players in his time at the University.” (The Quad, 1937, n.p.).

‘Ken’ (Baptized Kenneth at Grand Mere in 1914) attended the Laurentide High School and became ambitious to study Engineering, so he has come to Bishop’s to take one year in Arts. Like all Grand Mere people, Ken is keen on skiing. His other activities are Rugby, Golf, Badminton, C.O.T.C. and Music.