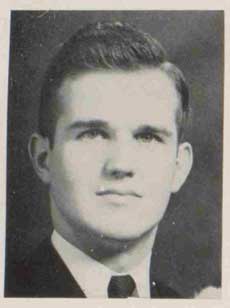 Russell C. Rexford — was born at Ayer’s Cliff on the 20th of July, 1938 (this is the doubtful date given). He went to Magog High School where skiing, track and hockey took up a good part of his time. His interests seem to be in the ever increasing field of art, and although the work he has chosen to do when he graduates with a B. Sc. is a far cry from art, it is equally as interesting, and doubtless he will be one of out most promising Industrial Chemists. Debating and skiing seem to be his proposed activities at Bishop’s.

Rex lives in Magog—that is when he isn’t in the chemistry lab, the Q.M.S. or entertaining the Dramatics Executive. Magog High School sent him forth with a matric in 1938, and he lost no time in coming to Bishop’s in search of further knowledge.

His first year found him freshman associate on the football team. From this humble start he rose to be assistant manager, and this year he filled very capably the position of manager. Dramatics also found him an enthusiastic worker. As a freshman he was seen, but not heard, in one of the Minor Plays. Next year he retired to the comparative obscurity of being business manager, which led finally to his election as President of Dramatics.

For three years the O.T.C. has claimed a large share of Rex’s time. This year he filled the difficult position of Quartermaster Sergeant. The Contingent was completely outfitted with new equipment, and much credit is due Rex for the smooth way in which it was issued. The Q.M. Stores were also built over on modern lines while he was C.Q.M.S.

Among the more minor activities Rex has found time for Badminton, Skiing, Golf, and one debate.

When he graduates in June with a B. Sc. in Chemistry and Physics, Rex plans to become a chemist and to obtain a commission in the Reserve Army. If he puts half the energy into this that he has put into his activities here at Bishop’s, Rex is sure to be an unqualified success.