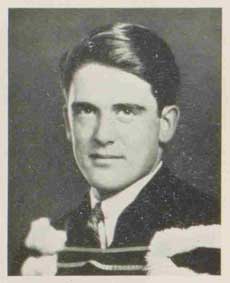 Received his B.A. in 1934. Henry returned to Bishop’s for the Teacher’s Course in 1935, earning an Education degree as well as a High School certificate.

Henry first awakened the inhabitants of Knowlton with his lusty howls on February 12th, 1914. He led and active life while accumulating knowledge at Knowlton High School, and now comes to Bishop’s in search of an M.A. in economics. Later on he aspires to Law or the business world. He is interested in Hockey, Tennis, Debating, and like many of his fellow freshmen can sing quite truthfully “I’m in the army now.” Henry does not record any other hobbies or interests, but it is reported that he is out to make the most of every moment.

Harry was born on Feb. 12th in the eventful year 1914, and in no other place than Knowlton. He seems to have been born with some kind of spoon in his mouth which he could never get out. Since ‘Silence is golden’, the spoon must have been silver. This came to our notice after he graduated from Knowlton High and took up residence—not studies—at Bishop’s.

In his freshman year he was meek and mild and consequently feel into the clutches of the C.O.T.C., becoming a victim in both his second and third years. In his first year he played inter-year football and junior hockey. In his second year he decided that he would like to get some use out of the football field that he had helped mark so he became a member of the Intermediates. He also played Junior Hockey and was Property Manager of the Dramatic Society. In his third year he was that outside of the first team whom we recall as usually swathed in adhesive tape. Outside the ‘sports world’ he was Secretary-Treasurer of the Students’ Council and Stage Manager of the Dramatic Society. Apart from his whisperings to his pious room-mate and a few buckets of water coming out of the blue we would hardly be aware of his existence. He will be gone this June, but only till next year.

Harry H. Pibus, B.A. — The question as to whether the ‘Old Arts’ would be a morgue (figuratively speaking) or a seething surmoil for 1934-35 was definitely settled last September when Harry came back (ostensibly) for a High School Diploma. On some of his life here Harry refuses to divulge any information but we do know that he was an official referee of the E.T.J.H. league and (unofficially) refereed some of the girls’ hockey games. He was also a member of the Year Book Committee. (He actually came to some of the meetings.) Thanks to Dr. Rothney’s insistence Harry turned out for rugby. He now owns a silver football and has been a regular on three successive championship teams.