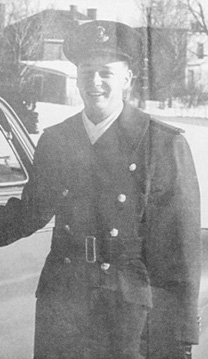 The original photograph of John, pictured at left, appeared in the Globe and Mail on Tuesday, November 11, 2003 accompanied by an article written by Jonathan Vance. The article, titled “He was the world to someone,” detailed the author’s experience in finding an unidentified photograph at a church rummage sale when he was a young boy in 1973. Vance paid 10¢ for the photo; later on, a letter to the editor appeared in the Globe and Mail, written by Milne’s sister Joan (living in Morris Island, NS at the time), that identified the airman in the photograph as John Riley Milne. (Veterans Affairs Canada).

Killed in a plane crash near Bagotville, Quebec. Was in the R.C.A.F. for two years after enlisting at the end of his second academic year. While at Bishop’s, John took an active part in all activities, including rugby and hockey. His sister Joan was a student at his Alma Mater at the time of his death.