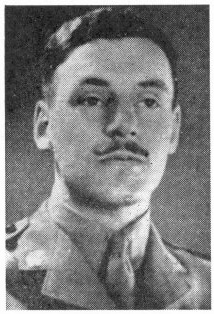 Son of Michael A. and Muriel Hart Michaels, of Montreal, Quebec, Canada. Born in Westmount.

John attended Argyle and Westmount High Schools prior to Bishop’s.

John developed an interest in the Palestine throughout his time there after university. He spent months in Kfar Yeheskel and at Ain Harod. He undertook Zionist work while in London.

John specialized in tactics and mortars while serving with the Artists’ Rifles in London. His unit was later relocated to the Palestine in 1938, where John served with the Imperial Forces in subduing the Arab riots. There he was awarded the Military Medal (M.M.) for bravery. John’s regiment continued operations in the East at the start of the Second World War. He was killed in action. (Veterans Affairs Canada).

The late Archdeacon Scott of Quebec City wrote of John, in a letter to the family:

“In Honor, Chivalrous,
In Duty, Valorous;
In all things Noble,
To the Heart’s Core, Clean.”