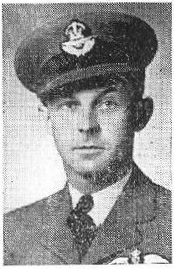 Lt. McCaig returned the following year to take the Teacher’s Course, as well as receive a High School certificate. He taught at Stanstead College and Westmount High School before the war.

Joined the Air Force in September 1941, received his wings and commission one year later and was posted overseas. Lt. McCaig was awarded the Distinguished Flying Cross (D.F.C.) for “exceptional courage, skill and resourcefulness” after returning a crippled Lancaster safely to base following a raid over Manheim.

McCaig Bay in the NorthWest Territories was named after Flight Lieutenant McCaig.

Leslie N. McCaig is a graduate of the Ormstown High School. At Bishop’s he is taking an Arts Course and expects to go on to get his High School Diploma. He is interested in Rugby.

The Championship Team by W. J. Belford, on the Rugby season:

Another good reason the [football] team got to Toronto is Les McCaig who not only was an economic genius but was one of the few managers that could satisfy all the players most of the time. Only a player or a manager can understand what that means.