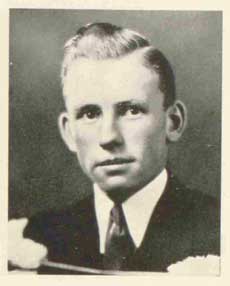 Returned the following year and completed the Teacher’s Course (The Quad, 1935, p.36).

Assistant manager of the Intermediate and Junior Rugby teams in 1933. (The Quad, 1933, p.44-45); Manager of both teams the following year (The Quad, 1934, p.58-59). Regarding Hugh, in the position of team manager: “Hugh Gall effortlessly grounded the equipment and in general was always on hand to look after the interests of his team; it is even said that worried players come to confide in him and lay their heads on his lap: but, frankly, we don’t believe that.” (The Quad, 1934, p.59).

Hugh represents the contribution which Lachute, Quebec, made to this year’s freshman class. He was born in that centre on July 28th, 1913, and a year later the Great War broke out. Lachute Academy witnessed the early struggles of this young man to grasp the elusive elements of the three R’s. He comes to us with intentions of exploring the joys of Golf, Hockey, and Tennis and the woes of the O.T.C. He also wishes to swell the membership of the Dramatic Society. His aim in life is to ‘teach and be taught’.