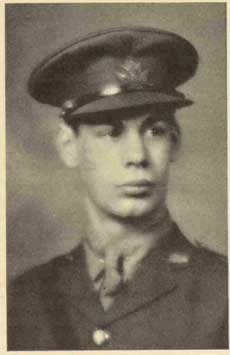 Assistant manager of the University Basketball team (The Quad, 1933, p.48).

Edward, who is better known as ‘Boots’, has been in the vicinity of the College for the last seventeen years with the exception of two years while he pursued the course of study at Bristol Grammar School, England. He attended B.C.S. where he conceived a desire to obtain a B.A. He is interested in the O.T.C. (who isn’t?), Rugby, Debating, Dramatics and Badminton.

Edward was born on March 15th, 1914, at Lennoxville; but the inauspicious Ides do not seem to have unduly affected his career. He had long been known around the College when he entered Bishop’s in the fall of ’31. Previous to that occasion, Edward attended Lennoxville High School and B.C.S., with two years at Bristol Grammar School, England, thrown in for good measure.

Edward’s activities at Bishop’s have been many and various; not to mention his three years of Junior Rugby, he has an honorable record in Debating. Besides being Secretary-Treasurer of the Society in 1932-33 he debated for Arts in his Freshman year, and for the Unviversity in ’33 and was an efficient Assistant Basketball Manager. Monday afternoons have always found him Scouting; indeed he was among the six founders of the new Rover Crew.

But the above achievements fade before Edward’s record in the C.O.T.C. He has both his ‘A’ and ‘B’ certificates, and has been a Second Lieutenant for two years. This year, Number One Platoon, of which he was in command, won the annual competition. Edward is well-known as an officer who makes the doughboys toe the mark.

Ostensibly, though, we come to College to acquire knowledge; and Edward has done more than make a pretense of fulfilling that mission. He entered Bishop’s with the Robert Bruce Scholarship, and in his first year qualified for History Honours. Next year, he intends to come back for his High School Diploma; and for the more distant future, there is a vague idea about going in for Law.