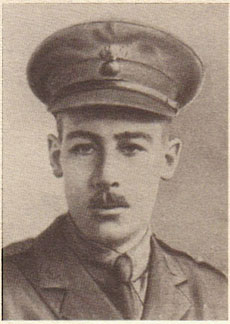 “Harry” was Class Valedictorian. He said of Bishop’s, in his speech dated June 22, 1911: “We have all enjoyed our stay here and we shall always look back upon it as the happiest time of our lives.” A full transcription of Harry’s valedictory address can be found on pages 10-11 of The Mitre, June 1911.

Served in France, and was killed in action at the capture of Regina Trench.

Harry’s father, Frederick George Scott served as a senior chaplain with the First Canadian Division. After the Canadians later took and held the Trench, Canon Scott’s duties brought him to the front lines where Harry fell. A short article published December 1st, 1916 in the Toronto Star recounts Canon Scott’s subsequent search for his son’s remains among the “hastily made graves” on the front lines. The article ends with: “Finally he found young Scott, and with fatherly tenderness carried him back to a quiet resting place behind the lines. There with his own hands he erected a cross and offered up a prayer to the God of battles. Brave father and brave son were united again for a brief moment.” (Veterans Affairs Canada).

Scott tells of his experience in his book, The Great War As I Saw It (1922). Alexander McClintock, who assisted Scott in finding his son’s body, also writes of it in Best O’Luck (1917). 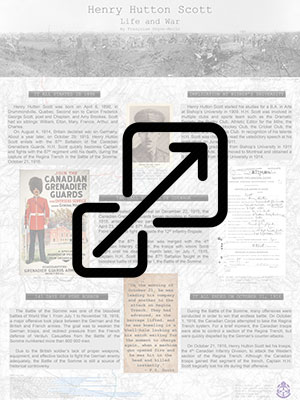