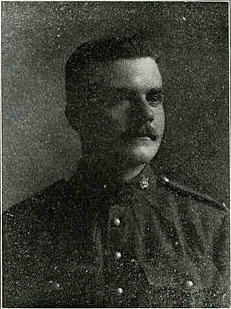 Assistant Business Manager for The Mitre (The Mitre, November 1913, p.1).

Secretary and later Director of the Brotherhood of St. Andrew (The Mitre, November 1913, p.14); committee member of the Missionary Union.

“Many of the last year’s team were not back, a great many having enlisted for Overseas Service, among these being Robertson, our star half, Lobban who was captain of the team for two years, and Wilkinson who played in the scrim.”

The news of the fall in battle of Pte. Jas. A. Lobban, of the 5th Mounted Rifles, will be received with widespread sorrow. ‘Jimmy’ graduated in Arts in 1915, and during his final year acted as Senior Man of the Arts Faculty. He took an important part in all the College activities, and to his zeal and industry we owe a great deal. He successfully captained the Football Team in the fall of 1914, and during his term as Business Manager of the Mitre, thanks to his energy, a heavy debt was paid off, and the magazine put on a firmer financial standing. The Mitre and his old fellow-students unite in sending most sincere and heartfelt sympathy to his parents and friends.

A letter from Private J. A. Lobban:

I am very much pleased to learn that those who are physically fit have attached themselves to the 22nd battery in Sherbrooke. At last, I think, we have enough men recruited, and we may be proud that Canada has done her share in sending men and in giving money.

A week ago last Sunday Canon Scott celebrated the Holy Communion where we were then billeted. It was a most impressive service and, as we knelt in a bed of straw, before the little altar in the barn, the sound of the big guns could be heard plainly. Many officers and men communicated. Canon Scott is just as jovial as ever, but has aged considerably. Canon Almond is to visit us on Sunday. He is chaplain of our corps. Last Wednesday afternoon our major and a lance-corporal were confirmed by the Bishop of Khartoum. Quite an event at the front—and by an Egyptian bishop! We have been in the trenches three times since coming over, but there is very little doing.

All the boys are well and happy. It is wonderful how every one is in good spirits, despite the inclement weather, etc.

We have had two or three games of Rugby and Association since coming over. 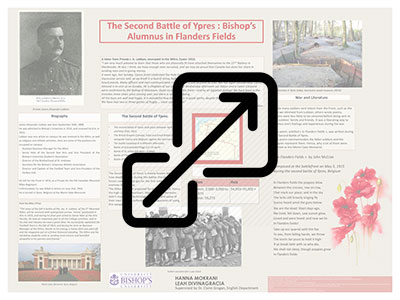 The Second Battle of Ypres : Bishop’s Alumnus in Flanders Fields
By: Hanna Mokrani and Leah Divinagracia