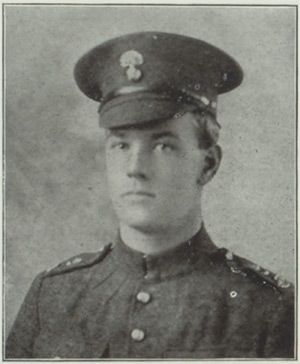 George’s father was rector of St. Anne’s Anglican Church and received his master’s degree from Bishop’s. George’s older brother Frank was a student at Bishop’s as well, before leaving to work for the Bank of Commerce in East Angus.

George enlisted in the army at the age of 18 (and ten months). He enlisted with his older brothers Franklin R. W. and Harry on the same day, in the same regiment, the Canadian Grenadier Guards.

While at Bishop’s, George played for the football and basketball teams. He played outside left wing for the Football team and was Secretary of the Basketball Club in 1913. He was also a committee member for the Debating Club. (The Mitre, November 1913, p.1, 30).

According to his enlistment medical records, George is described as being five feet eight-and-a-half inches tall with fair hair and blue eyes; he was the tallest of the three brothers.

George was later transferred from the Grenadier Guards to the Western Ontario Regiment in the 1st Battalion, Canadian Infantry following “some particularly nasty fighting” in 1916. Both of his brothers were wounded and later sent to the Canadian Forestry Depot, coincidently commanded by their father; however, they were subsequently discharged due to their being considered unfit for further duty.

George was killed during the capture of Upton Wood on August 30, 1918, 13 days before his 22nd birthday, and a little more than a month before the armistice. Upton Wood is the name given to a small forest near Hendecourt-les-Cagnicourt in France. George is buried in the Upton Wood Military Cemetery.

During the heavy fighting of the summer of 1918 there died on the field of honour still another undergraduate of the University, Lieut. George P. Belford, son of the Rev. J. F. Bedlford, Rector of Richmond. George, with his brother Frank (another of our students) enlisted as privates in the 87th Canadian Grenadiers, but speedily attained non-commissioned rank and later both secured commissions. The subject of our notice fought in many severe engagements and for a time seemed to bear a charmed life. Now he has ‘Gone West’ with tens of thousands of other gallant fellows. He was a College contemporary of such men as Lobban, Robertson, A.P. Williams, Porter, and Wilkinson, all of whom have made the supreme sacrifice. Like most of those mentioned above, he was a keen athlete, and held an honoured place upon the Senior Foot-ball team. When in residence, his lovable and kindly disposition made him a general favourite.—R.I.P. 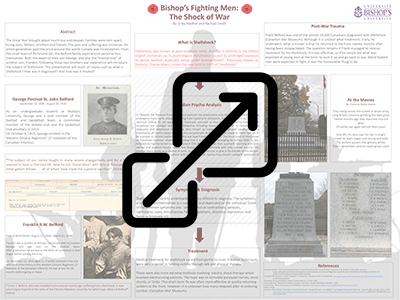 Bishop’s Fighting Men: The Shock of War
By: Erika Mailhot and Rachael Smith